Here is a copy of the paper I wrote for my research in physics class, which is a year-long introductory course for physics based research in a lab. In the end, my project was more of research in chemistry than physics, but I got close to a functional capacitor. 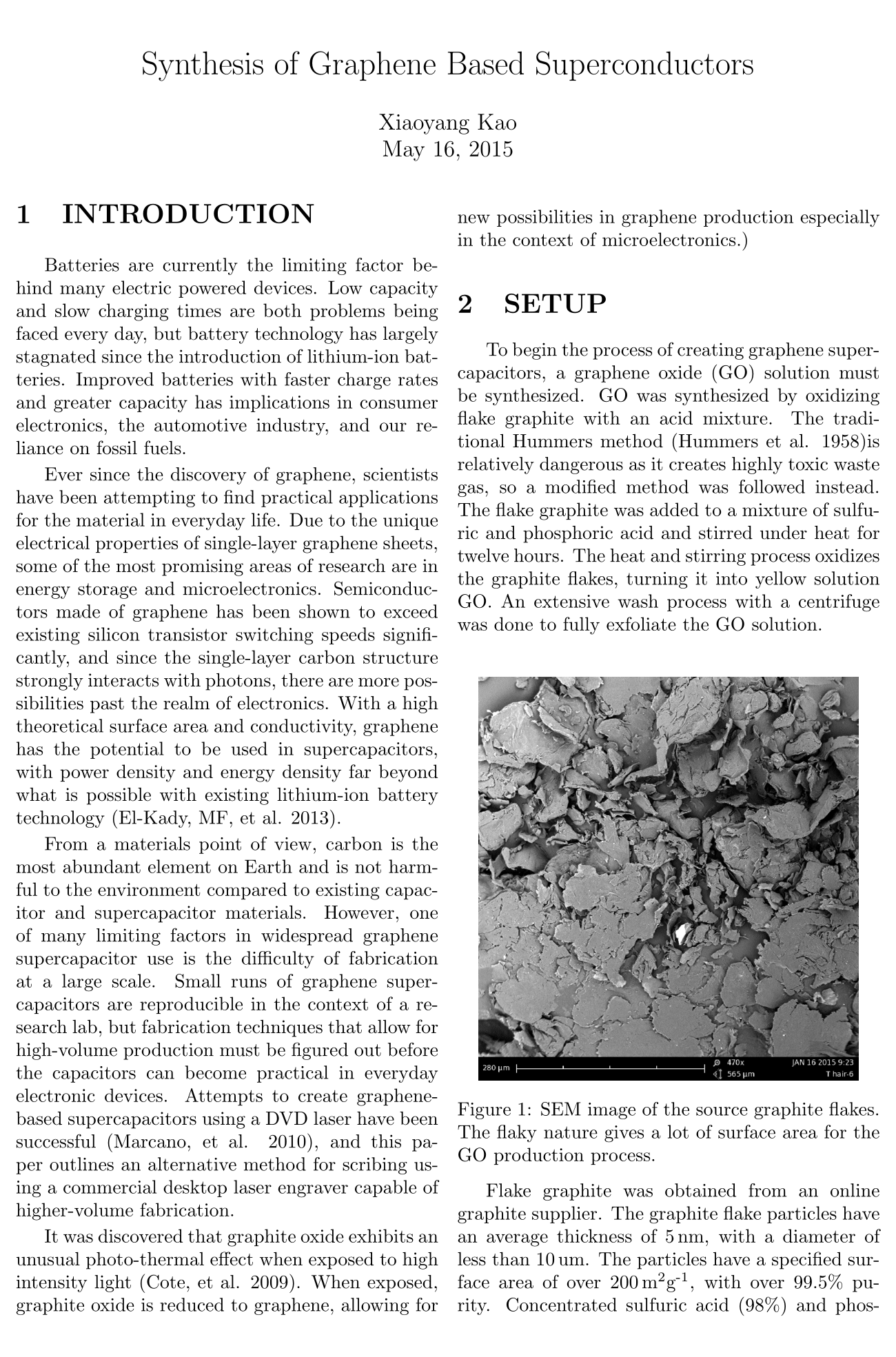 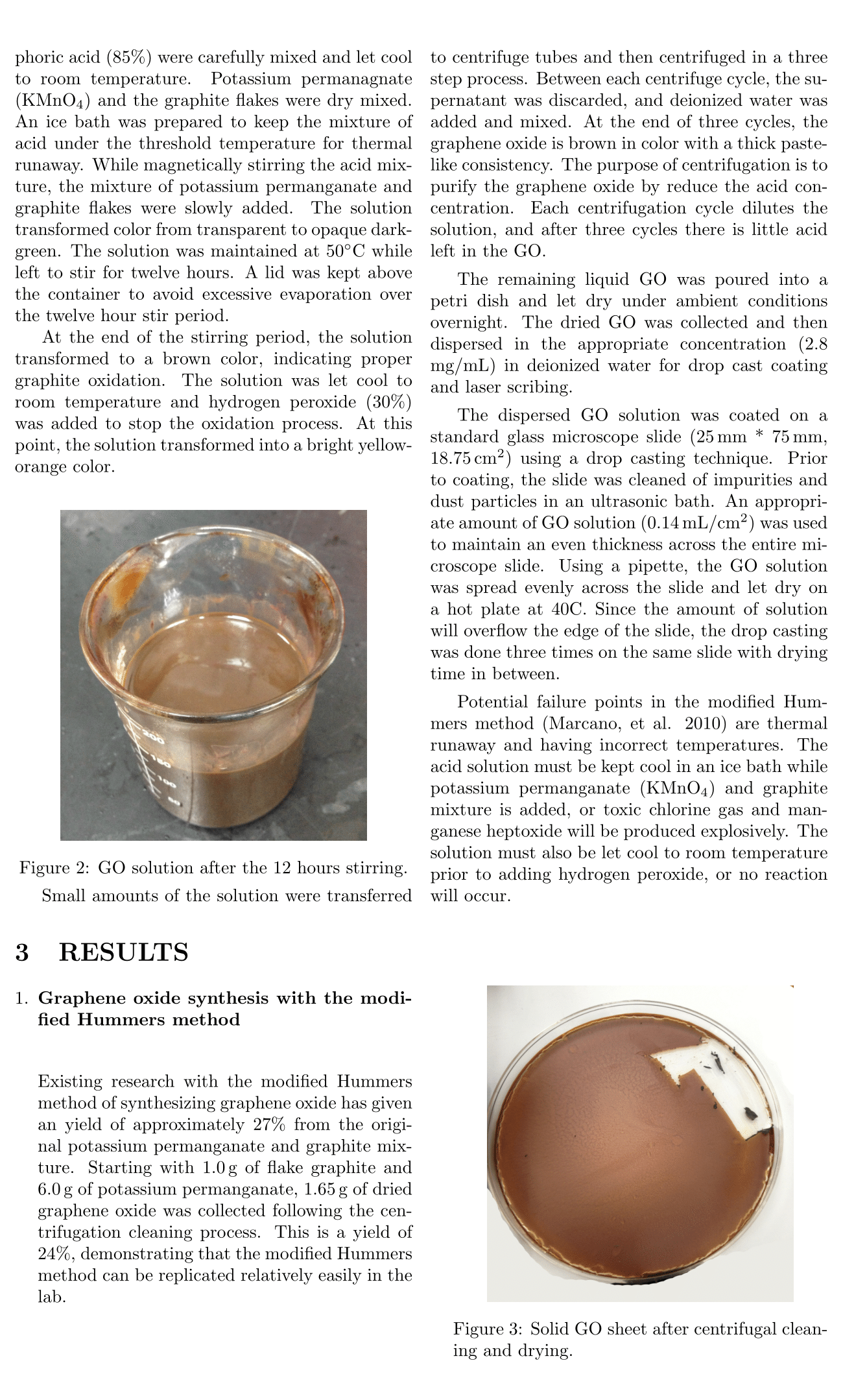 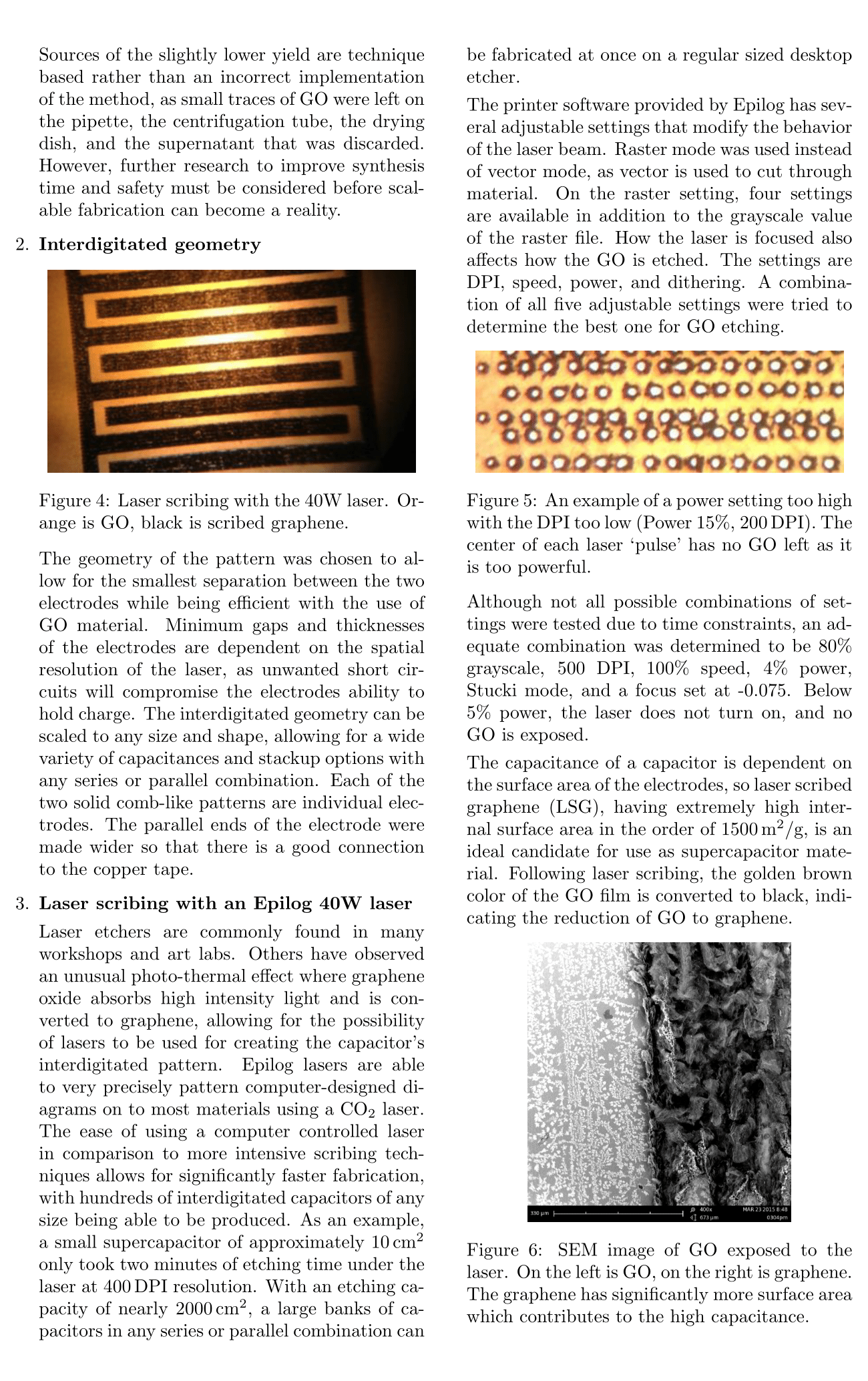 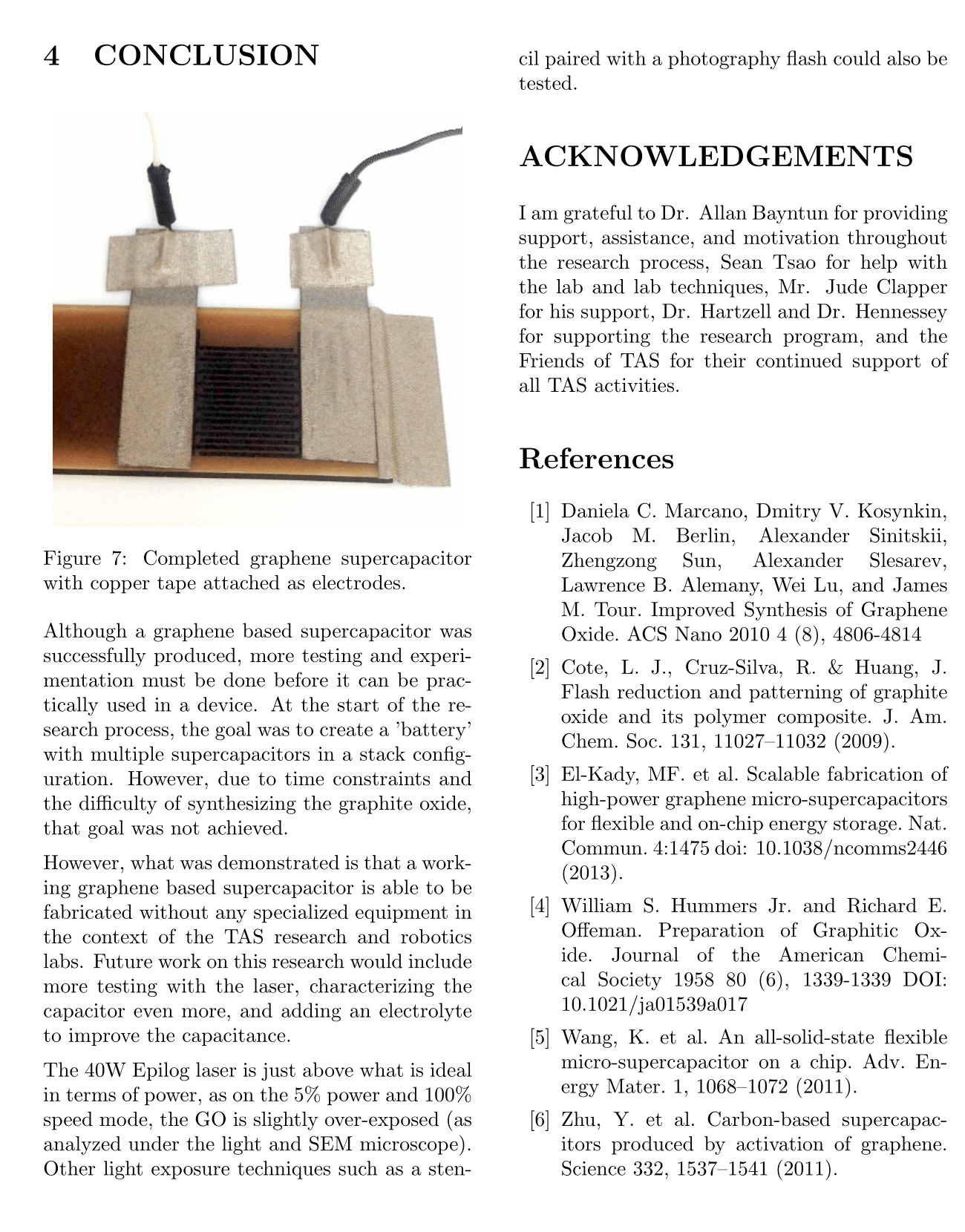 Batteries are currently the limiting factor behind many electric powered devices. Low capacity and slow charging times are both problems being faced every day, but battery technology has largely stagnated since the introduction of lithium-ion batteries. Improved batteries with faster charge rates and greater capacity has implications in consumer electronics, the automotive industry, and our reliance on fossil fuels.

Ever since the discovery of graphene, scientists have been attempting to find practical applications for the material in everyday life. Due to the unique electrical properties of single-layer graphene sheets, some of the most promising areas of research are in energy storage and microelectronics. Semiconductors made of graphene has been shown to exceed existing silicon transistor switching speeds significantly, and since the single-layer carbon structure strongly interacts with photons, there are more possibilities past the realm of electronics. With a high theoretical surface area and conductivity, graphene has the potential to be used in supercapacitors, with power density and energy density far beyond what is possible with existing lithium-ion battery technology (El-Kady, MF, et al. 2013).

From a materials point of view, carbon is the most abundant element on Earth and is not harmful to the environment compared to existing capacitor and supercapacitor materials. However, one of many limiting factors in widespread graphene supercapacitor use is the difficulty of fabrication at a large scale. Small runs of graphene supercapacitors are reproducible in the context of a research lab, but fabrication techniques that allow for high-volume production must be figured out before the capacitors can become practical in everyday electronic devices. Attempts to create graphene-based supercapacitors using a DVD laser have been successful (Marcano, et al. 2010), and this paper outlines an alternative method for scribing using a commercial desktop laser engraver capable of higher-volume fabrication.

It was discovered that graphite oxide exhibits an unusual photo-thermal effect when exposed to high intensity light (Cote, et al. 2009). When exposed, graphite oxide is reduced to graphene, allowing for new possibilities in graphene production especially in the context of microelectronics.

To begin the process of creating graphene supercapacitors, a graphene oxide (GO) solution must be synthesized. GO was synthesized by oxidizing flake graphite with an acid mixture. The traditional Hummers method (Hummers et al. 1958)is relatively dangerous as it creates highly toxic waste gas, so a modified method was followed instead. The flake graphite was added to a mixture of sulfuric and phosphoric acid and stirred under heat for twelve hours. The heat and stirring process oxidizes the graphite flakes, turning it into yellow solution GO. An extensive wash process with a centrifuge was done to fully exfoliate the GO solution.

Flake graphite was obtained from an online graphite supplier. The graphite flake particles have an average thickness of 5 nm, with a diameter of less than 10 um. The particles have a specified surface area of over 200m^2g^-}, with over 99.5% purity. Concentrated sulfuric acid (98%) and phosphoric acid (85%) were carefully mixed and let cool to room temperature. Potassium permanagnate (KMnO4) and the graphite flakes were dry mixed. An ice bath was prepared to keep the mixture of acid under the threshold temperature for thermal runaway. While magnetically stirring the acid mixture, the mixture of potassium permanganate and graphite flakes were slowly added. The solution transformed color from transparent to opaque dark-green. The solution was maintained at 50C while left to stir for twelve hours. A lid was kept above the container to avoid excessive evaporation over the twelve hour stir period.

Small amounts of the solution were transferred to centrifuge tubes and then centrifuged in a three step process. Between each centrifuge cycle, the supernatant was discarded, and deionized water was added and mixed. At the end of three cycles, the graphene oxide is brown in color with a thick paste-like consistency. The purpose of centrifugation is to purify the graphene oxide by reduce the acid concentration. Each centrifugation cycle dilutes the solution, and after three cycles there is little acid left in the GO.

The remaining liquid GO was poured into a petri dish and let dry under ambient conditions overnight. The dried GO was collected and then dispersed in the appropriate concentration (2.8 mg/mL) in deionized water for drop cast coating and laser scribing.

The dispersed GO solution was coated on a standard glass microscope slide (25 mm * 75 mm, 18.75 cm^2) using a drop casting technique. Prior to coating, the slide was cleaned of impurities and dust particles in an ultrasonic bath. An appropriate amount of GO solution (0.14 mL/cm^2) was used to maintain an even thickness across the entire microscope slide. Using a pipette, the GO solution was spread evenly across the slide and let dry on a hot plate at 40C. Since the amount of solution will overflow the edge of the slide, the drop casting was done three times on the same slide with drying time in between.

Potential failure points in the modified Hummers method (Marcano, et al. 2010) are thermal runaway and having incorrect temperatures. The acid solution must be kept cool in an ice bath while potassium permanganate (KMnO4) and graphite mixture is added, or toxic chlorine gas and manganese heptoxide will be produced explosively. The solution must also be let cool to room temperature prior to adding hydrogen peroxide, or no reaction will occur.

Existing research with the modified Hummers method of synthesizing graphene oxide has given an yield of approximately 27% from the original potassium permanganate and graphite mixture. Starting with 1.0 g of flake graphite and 6.0 g of potassium permanganate, 1.65 g of dried graphene oxide was collected following the centrifugation cleaning process. This is a yield of 24%, demonstrating that the modified Hummers method can be replicated relatively easily in the lab.

Sources of the slightly lower yield are technique based rather than an incorrect implementation of the method, as small traces of GO were left on the pipette, the centrifugation tube, the drying dish, and the supernatant that was discarded. However, further research to improve synthesis time and safety must be considered before scalable fabrication can become a reality.

The geometry of the pattern was chosen to allow for the smallest separation between the two electrodes while being efficient with the use of GO material. Minimum gaps and thicknesses of the electrodes are dependent on the spatial resolution of the laser, as unwanted short circuits will compromise the electrodes ability to hold charge. The interdigitated geometry can be scaled to any size and shape, allowing for a wide variety of capacitances and stackup options with any series or parallel combination. Each of the two solid comb-like patterns are individual electrodes. The parallel ends of the electrode were made wider so that there is a good connection to the copper tape.

Laser etchers are commonly found in many workshops and art labs. Others have observed an unusual photo-thermal effect where graphene oxide absorbs high intensity light and is converted to graphene, allowing for the possibility of lasers to be used for creating the capacitor’s interdigitated pattern. Epilog lasers are able to very precisely pattern computer-designed diagrams on to most materials using a CO2 laser. The ease of using a computer controlled laser in comparison to more intensive scribing techniques allows for significantly faster fabrication, with hundreds of interdigitated capacitors of any size being able to be produced. As an example, a small supercapacitor of approximately 10 cm^2 only took two minutes of etching time under the laser at 400 DPI resolution. With an etching capacity of nearly 2000 cm^2, a large banks of capacitors in any series or parallel combination can be fabricated at once on a regular sized desktop etcher.

The printer software provided by Epilog has several adjustable settings that modify the behavior of the laser beam. Raster mode was used instead of vector mode, as vector is used to cut through material. On the raster setting, four settings are available in addition to the grayscale value of the raster file. How the laser is focused also affects how the GO is etched. The settings are DPI, speed, power, and dithering. A combination of all five adjustable settings were tried to determine the best one for GO etching.

Although not all possible combinations of settings were tested due to time constraints, an adequate combination was determined to be 80% grayscale, 500 DPI, 100% speed, 4% power, Stucki mode, and a focus set at -0.075. Below 5% power, the laser does not turn on, and no GO is exposed.

The capacitance of a capacitor is dependent on the surface area of the electrodes, so laser scribed graphene (LSG), having extremely high internal surface area in the order of 1500 m^2/g, is an ideal candidate for use as supercapacitor material. Following laser scribing, the golden brown color of the GO film is converted to black, indicating the reduction of GO to graphene.

Although a graphene based supercapacitor was successfully produced, more testing and experimentation must be done before it can be practically used in a device. At the start of the research process, the goal was to create a ‘battery’ with multiple supercapacitors in a stack configuration. However, due to time constraints and the difficulty of synthesizing the graphite oxide, that goal was not achieved.

However, what was demonstrated is that a working graphene based supercapacitor is able to be fabricated without any specialized equipment in the context of the TAS research and robotics labs. Future work on this research would include more testing with the laser, characterizing the capacitor even more, and adding an electrolyte to improve the capacitance.

The 40W Epilog laser is just above what is ideal in terms of power, as on the 5% power and 100% speed mode, the GO is slightly over-exposed (as analyzed under the light and SEM microscope). Other light exposure techniques such as a stencil paired with a photography flash could also be tested.

I am grateful to Dr. Allan Bayntun for providing support, assistance, and motivation throughout the research process, Sean Tsao for help with the lab and lab techniques, Mr. Jude Clapper for his support, Dr. Hartzell and Dr. Hennessey for supporting the research program, and the Friends of TAS for their continued support of all TAS activities.