Ever since I got my 3D printer i’ve been using Slic3r for generating g-code. What a ‘slicer’ does is generate instructions for the printer from your 3D model, telling it where to move and when to extrude plastic. Slic3r was the recommended slicer for reprap-style printers like mine, so I always stuck with that and never tried other ones. What I didn’t know was that a slicer could make a huge difference in print quality, even more so than properly calibrating the printer.

I was very frustrated with the prints coming out of my machine after doing everything that was recommended. I tensioned the belts properly, tightened loose bolts on the frame, calibrated the stepper current levels, and did everything else that people said would help, but I didn’t see much of a difference.

Check out these two prints (KISSlicer on the left, Slic3r on the right): 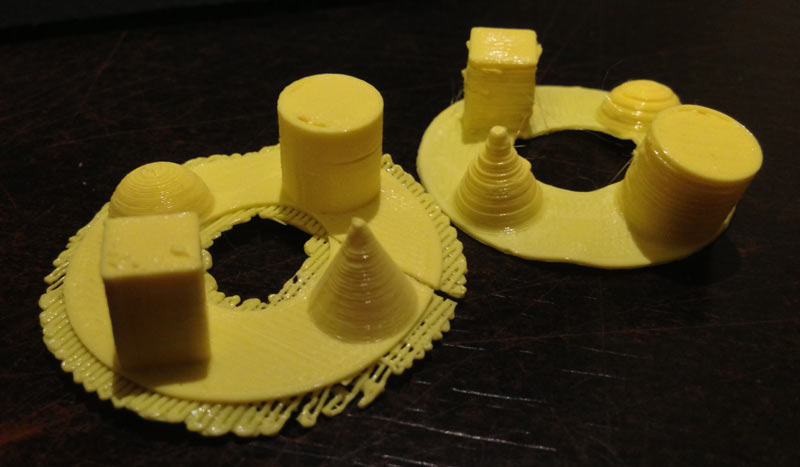 These two were printed on the same calibrated machine with the same Marlin firmware. The only difference was the slicer. With Slic3r, the layers are inconsistent in size (look the walls of the square and circle compared to the KISSlicer print), and there are significant problems with the cone and hemisphere.

With KISSlicer, the print walls are even and smooth. It also took only nine minutes to print the KISSlicer model - half of the Slic3r.

If you are having problems with print quality and uneven perimeters, try other slicers and see what happens. I’ll be using KISSlicer from now on on my printer.